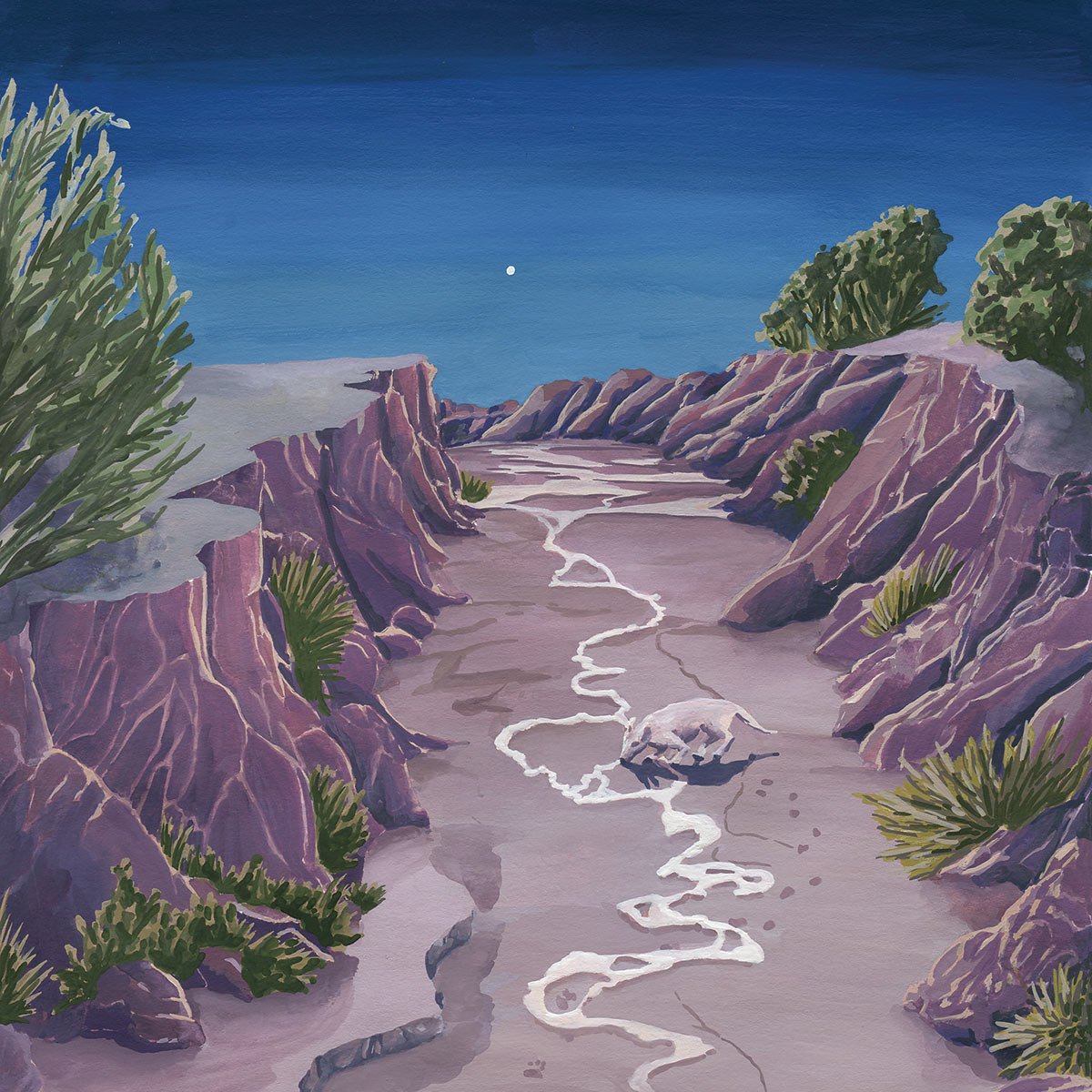 Dawn is just bluing the sky when I slip outside to walk the arroyo that runs through my new neighborhood. Venus shines bright in the East; dark shadows still pool under bushy junipers. Since moving to New Mexico a few months ago, I’ve walked this waterway every morning, listening for birds, reading tracks and greeting familiar high-desert plants: Rocky Mountain juniper, rubber rabbitbrush, big sagebrush, blue grama grass and others.

I began walking nearby waters years ago as a new stepmom homesick for the West’s open spaces. My husband, Richard, his small daughter, Molly, and I had moved from Wyoming to West Virginia for Richard’s first teaching job. By the time Molly reached college, we had moved ten more times, to seven different states. And I had worn out many pairs of walking shoes.

In each new place, I searched out a waterway as my route to finding home. I’ve walked the banks of wooded swamps and bare-dirt irrigation ditches, creeks of every sort, and now this arroyo, where water normally hides below the red-sand surface, revealed in sinuous etchings after snowmelt or summer rain.

If rivers are Earth’s terrestrial arteries, these small waterways are capillaries, vital threads in keeping the land healthy. They channel runoff and serve as habitat and travel corridors for a diverse array of wildlife from yellow warblers to hunting cougars.

Although such nearby waters are often overlooked and degraded, they are paths to intimate connection with nature, as we discovered with a block of urban creek in southern Colorado. “The Ditch,” which ran between our former industrial property and downtown, had long ago been channelized and dredged for flood control; it still served as an informal dump.

If rivers are Earth’s terrestrial arteries, these small waterways are capillaries, vital threads in keeping the land healthy.

I walked its weedy banks every day, carrying gloves to pick up trash, from waterlogged plastic bags to soda bottles. I even hauled out shopping carts. Then I began pulling invasive weeds. On weekends, Richard and Molly helped me pull kochia, tumbleweed and cheatgrass plants by the trailer-load.

Clearing one dense weed patch, I unearthed treasure: sprouts of native streambank willow. I envisioned those shrubby willows as pioneers in restoring the creek, their stems growing tall and arching to shade the water and drop leaves into the slender flow, adding nutrients that would nurture aquatic insects and microbes.

Inspired, I bought and planted more native shrub sprouts in other weed-free areas: golden currant and red-twig dogwood for close to the creek; Indian plum, big sagebrush and rubber rabbitbrush for higher on the banks. Richard pried planting holes in the hard-packed soil; I hauled water to each sprout.

Over the next few years, we celebrated as the willows spread their shade along the creek; our shrub sprouts grew taller than the weeds; and other native plants began to return on their own, attracting butterflies, native bees and songbirds we hadn’t seen before in our neighborhood. The summer after I spotted the first felty leaves of common milkweeds, for instance, our first-ever monarch butterfly appeared, fluttering around its host plant.

Passers-by admired the wildflowers; kids waded the creek, searching for crawdads and tiny fish. A conservation nonprofit began using the waterway as an ecology lab for school classes. The block of creek we tended with occasional help from friends and neighbors eventually inspired a cooperative effort to restore the whole drainage.

Fifteen years after we adopted the creek, Richard died of brain cancer. I didn’t walk its banks for a long time.

The New Mexican arroyo I walk now has no name, but I can see that it is known by coyotes, desert cottontails, ravens, roadrunners, and other humans and their four-legged companions. As I traverse its sandy bottom each morning, I wonder what this waterway will ask of me. I don’t yet know it well enough to hear its voice. But I will. Each morning, I walk and listen.

Susan J. Tweit is the author of “Walking Nature Home” and several other books. Learn more and read her work at susanjtweit.com