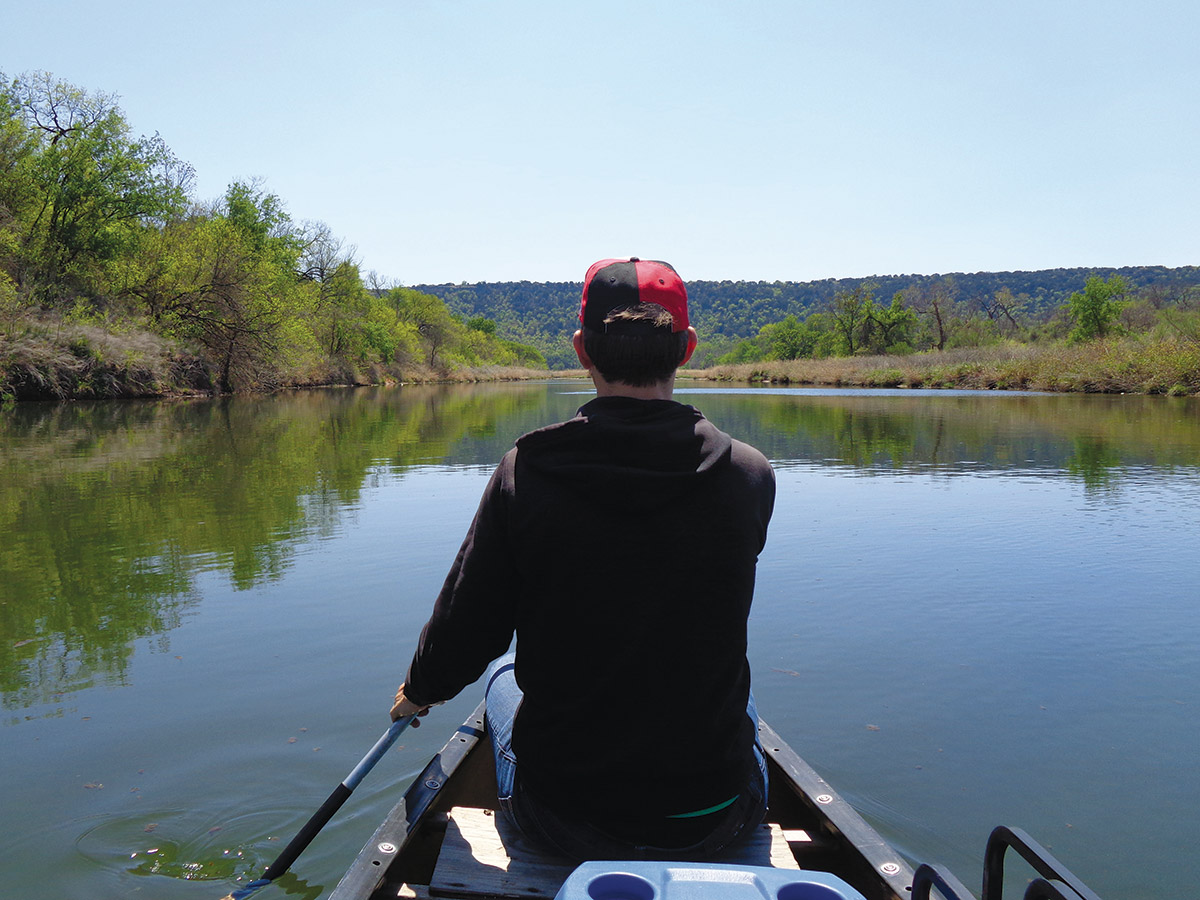 Moments after embarkation, Jimmie dips a paddle into the Brazos. PHOTO Amy McCullough

I walked away from my car, leaving the ignition key and $50 cash under the driver’s side floor mat. It’s the kind of arrangement that makes you wonder if you’re making a mistake. But so far so good.

The drive up toward Possum Kingdom Lake and the prep for our trip down the Brazos had all gone well: Everything we wanted to bring fit in the canoe easily. I had successfully planned a menu that was both exciting and efficient, requiring few utensils and only a pan and plates. And we had enough garbage bags to wrap everything should the weather (or paddling) take a turn for the wetter. I’d even gotten a snake bite kit — the one “next level” safety measure I’d never before thought necessary on our outdoor exploits. (I’ll admit “Lonesome Dove” had something to do with that — I joked when buying it that Larry McMurtry should be their spokesperson.)

The key and cash were for Buddy Rochelle of Rochelle’s Canoe Rental; he was supposed to come to our put-in spot southeast of the lake a few hours later and drive my car, an old Honda nicknamed “B. Nubs,” back to his property. We carried everything down the steep dirt boat ramp and put in around 1 p.m., our fingers crossed that we’d see B. Nubs again when we took out two days later and 20 miles downriver.

The scariest thing we saw was an alligator gar. I might as well get that out up front, since the first thing people want to hear about an adventure — even a small one — is whatever you found scariest. Prehistoric-looking alligator gar aren’t really threatening, but their long, crocodilian heads and thick, leathery scales are a little shocking if you’re not expecting to see one scooting past your vessel a few feet away, barely submerged.

The other startling thing we encountered was the sound of armadillos huffing through dirt around our first campsite in the middle of the night — a sound reminiscent of pressure breaks on a semi-truck. We weren’t sure what to make of it until we saw armadillo-face-shaped burrows and clawed-up ground the next morning.

This trip was taken in celebration of my partner’s 40th birthday (in early April), and I very much wanted it to go well. Jimmie and I have talked about going on a canoe-camping trip since we moved to Texas in 2009, and here we finally were, paddling gently toward Flint Bend, the first curve in this stretch of the Brazos River.

“Let’s take it easy at first,” said Jimmie, “since we don’t really know what we’re doing.”

Not knowing what we were doing turned out to be just fine. When we approached our first section of fast-moving water, its burble a pleasant addition of busy noise on a quiet day, we navigated it handily and were spat back into deeper water without issue. In fact, the pickup in speed and need for strategic paddling were more fun and exciting than stressful. 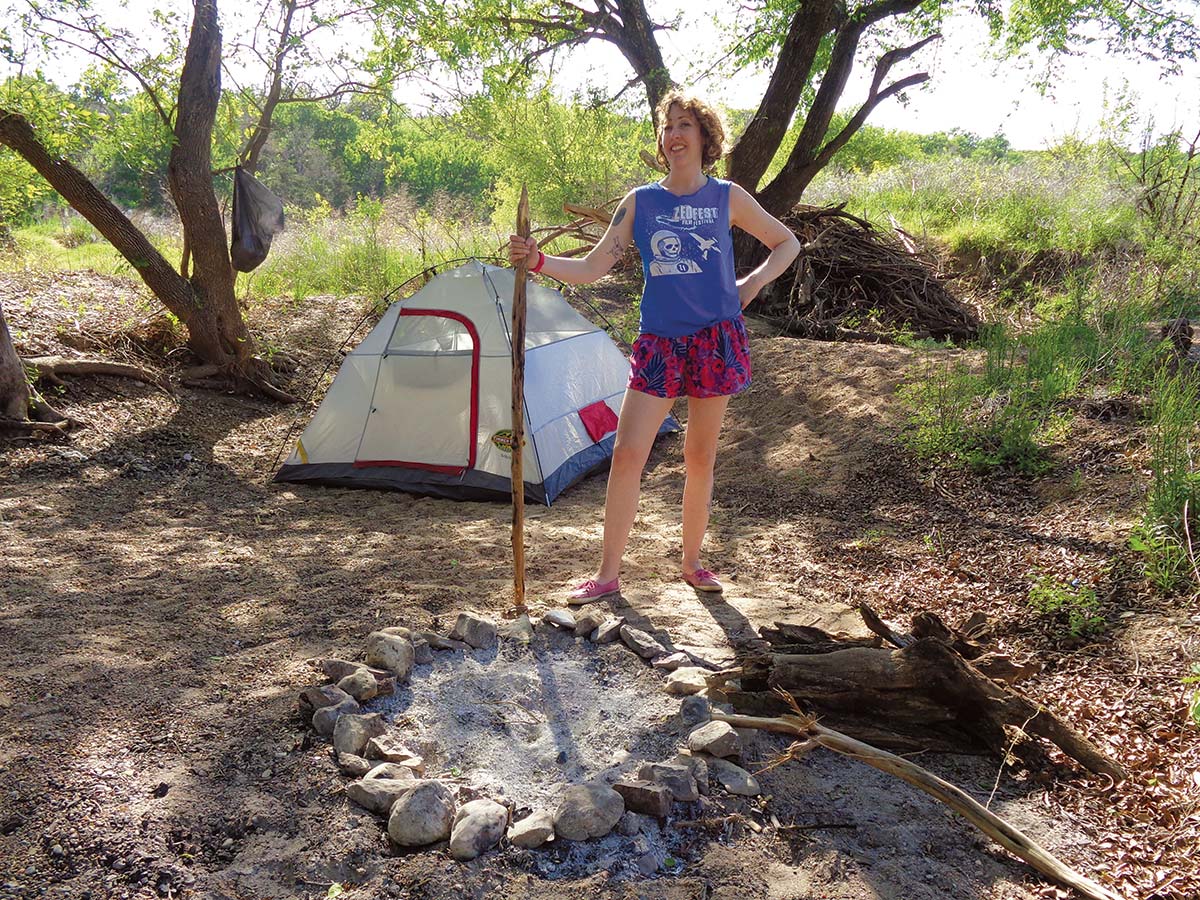 Campsites were a concern: Would there be nice places to set up camp? Is it legal? I posed the second question pretty far in advance, when I initially called Buddy back in January. I don’t believe I used the word “legal”; I probably said, “Is it cool to just camp on the shore?” To which he replied affirmative, as long as we didn’t jump any fences onto nearby ranchers’ land. A few bloggers who took the same journey corroborated this notion, so we decided not to worry about it.

The sites we ended up claiming — one about 5 miles in on the northwest bank and another about 13 miles in on an island near Eagle Creek — were both exceedingly ideal. In fact, one of the best parts about the trip was ending up in campsites that were right along the water; perfectly picturesque; rife with plentiful fire wood, parched and eager to burn; soft with sand under our tent; and — best of all — completely ours.

We saw scores of wildlife, and of course I geeked out a bit about plants — but not too much. You see, I had some excellent guidance on this trip — no, not from author John Graves, not from Buddy Rochelle, not from field guides or other people who have done this popular 20-mile leg of the Brazos (though I did use all of those resources in some way or another). The guidance I refer to came from a Wildflower Center guest who, to my knowledge, has nothing at all to do with the Brazos River. Let’s call her Lady Liberty.

Lady Liberty was visiting the Center from the still-frigid Northeast last spring. She told me she was doing her darnedest to not identify plants on her current travels. She said she can become too consumed in her field guides, taking hours to walk short distances and — oftentimes — feeling like she’s actually missed out on some of the experience because her nose was in a book. I could relate.

So I followed her lead. It was hard, but on our trip down the river, I didn’t take my musty, worn copy of Graves’ “Goodbye to a River.” I didn’t take my Audubon guides, the books that helped ignite my interest in birding in the first place. Instead, I simply watched the pairs of great blue herons swoop from trees; I wondered if the little blue herons and snowy egrets we often saw palling around together were BFFs or just casual acquaintances.

I wondered at the sound of cerulean warblers in the trees and followed one around with my binoculars, but I didn’t ID that cute little singer until I was back in Austin, at home among my books. I saw belted kingfishers but only knew them as “kingfishers” and nothing more until later. I thought about how snowy egrets don’t know that we use their yellow feet to tell them from other types of white, long-legged waders. They don’t even think about their yellow feet; they just have them.

Our second day on the river, under a thin (and short-lived) veil of clouds and before a strong headwind stirred up, we saw feral hogs — a spotted mother and several brown youngsters — on the shore. The day before, longhorn cows walked along the western shore, reminding us of our orange-and-white spotted hound dog. I thought about how none of these creatures (well, except our domesticated dog) has a name it knows of. We give them names because research and observations are more easily shared with an agreed-upon taxonomy.

I am better with the common names than the scientific, though two and a half years at the Wildflower Center has significantly changed that (I still recall the first time I saw a black-eyed Susan and had “Rudbeckia hirta” spring instantly to my mind with pride). On our trip, I recognized the brutal spines of tasajillo (Cylindropuntia leptocaulis) blazing in the sun on a hillside where we stopped to eat cold apples, cheese and salami. In the grassy areas dotted with cow pies were purple phlox with whitish centers.

I knew the elms and thanked them for shading our campsites with strong, horizontal branches (though I needed the help of our arborist to later narrow them to Ulmus americana). I knew the dark green expanses of “cedar” (Juniperus ashei) and delighted in how their color offset the bright lime green of new spring leaves.

On the sandy shore, I saw the spotted leaves of Smilax sp., a plant I actually know better by its genus name (than its common ones) thanks to participating in vegetation surveys on the Center’s research plots.

Later, some small orange flower on a sand bar stumped me, appearing as a stranger. It might have been hoary puccoon (Lithospermum canescens), though our native plant database says this particular Lithospermum species isn’t usually found in sandy areas. I didn’t take its picture; I only had my memory to reference, so I may never know, and that’s okay.

The only plants and animals I could name on the Brazos are the ones I already knew. But I saw them all. And while that limited number is an inspiration to me to learn more, it’s also a reminder that, sometimes, it is valuable to just be, to step back and behold the natural world without any reference but eyes and ears and hands, to see plants and animals as they were — and are — without human involvement: that is, naked and nameless.

When we arrived at the sandbar island that would be home for the second night, in between Chick Bend and Eagle Creek, it was warm and sunny, in the upper 80s, and the south side of the island had a clear, deep pool that beckoned, begged to be swam in. I turned to go back to the canoe, where I would access my bag and put on my swimsuit. Then I realized there was no point. I stripped down on the beach, where the familiar face of prairie verbena decorated a sandy ridge with purple pompoms, and ran full force into the crisp, cold water.

(Oh, and the next day, B. Nubs was waiting for us at the take-out point.)